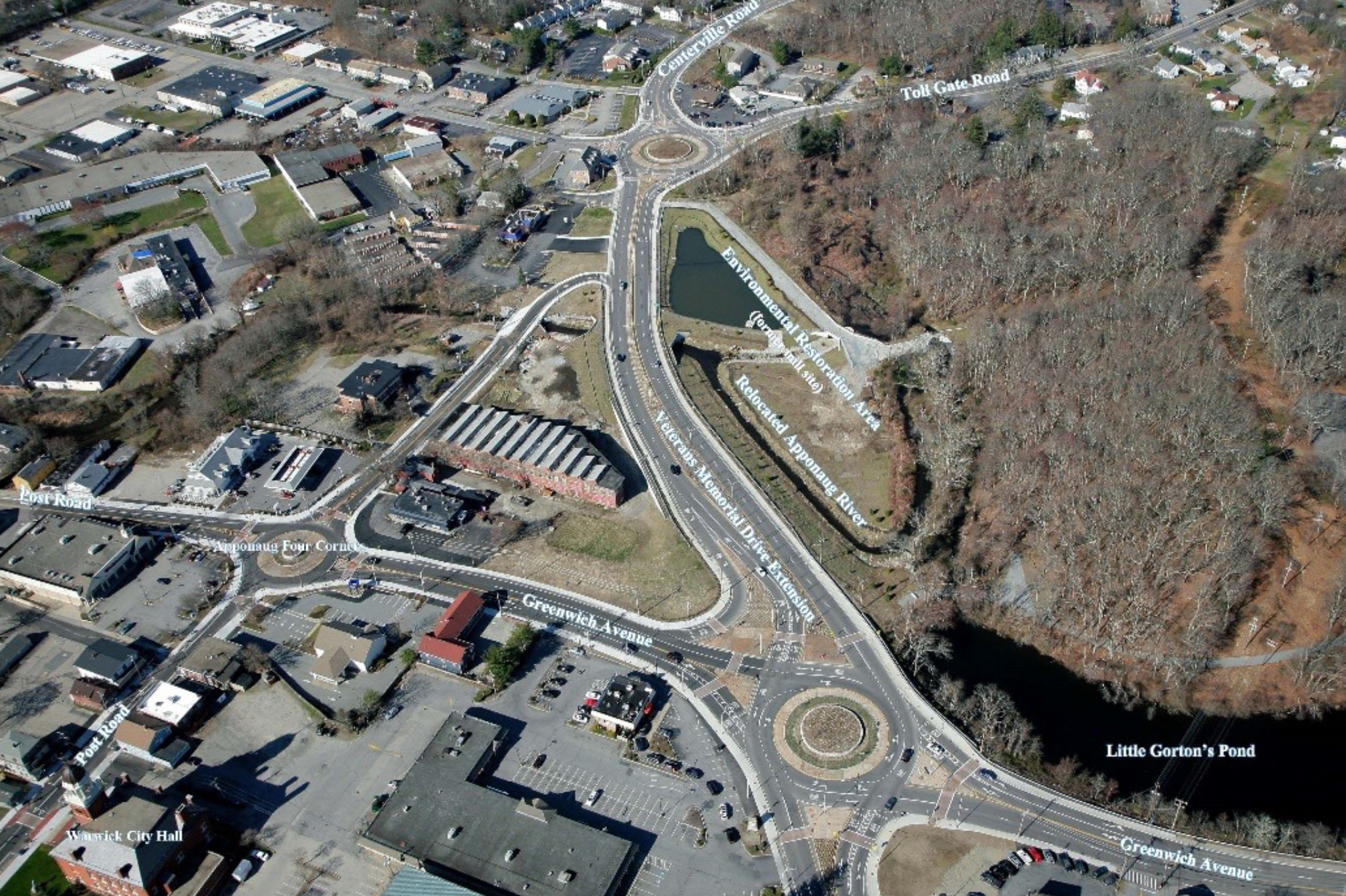 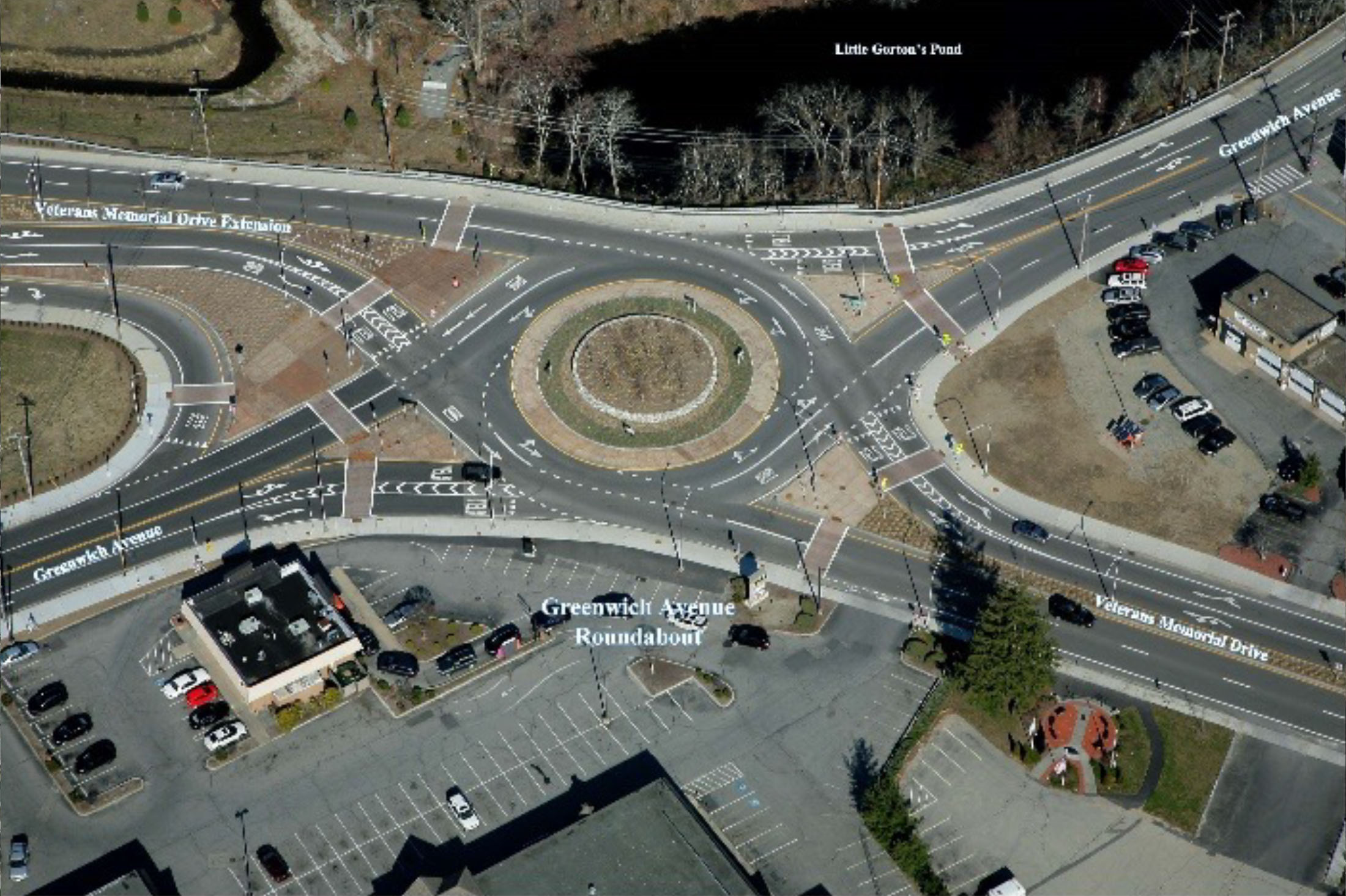 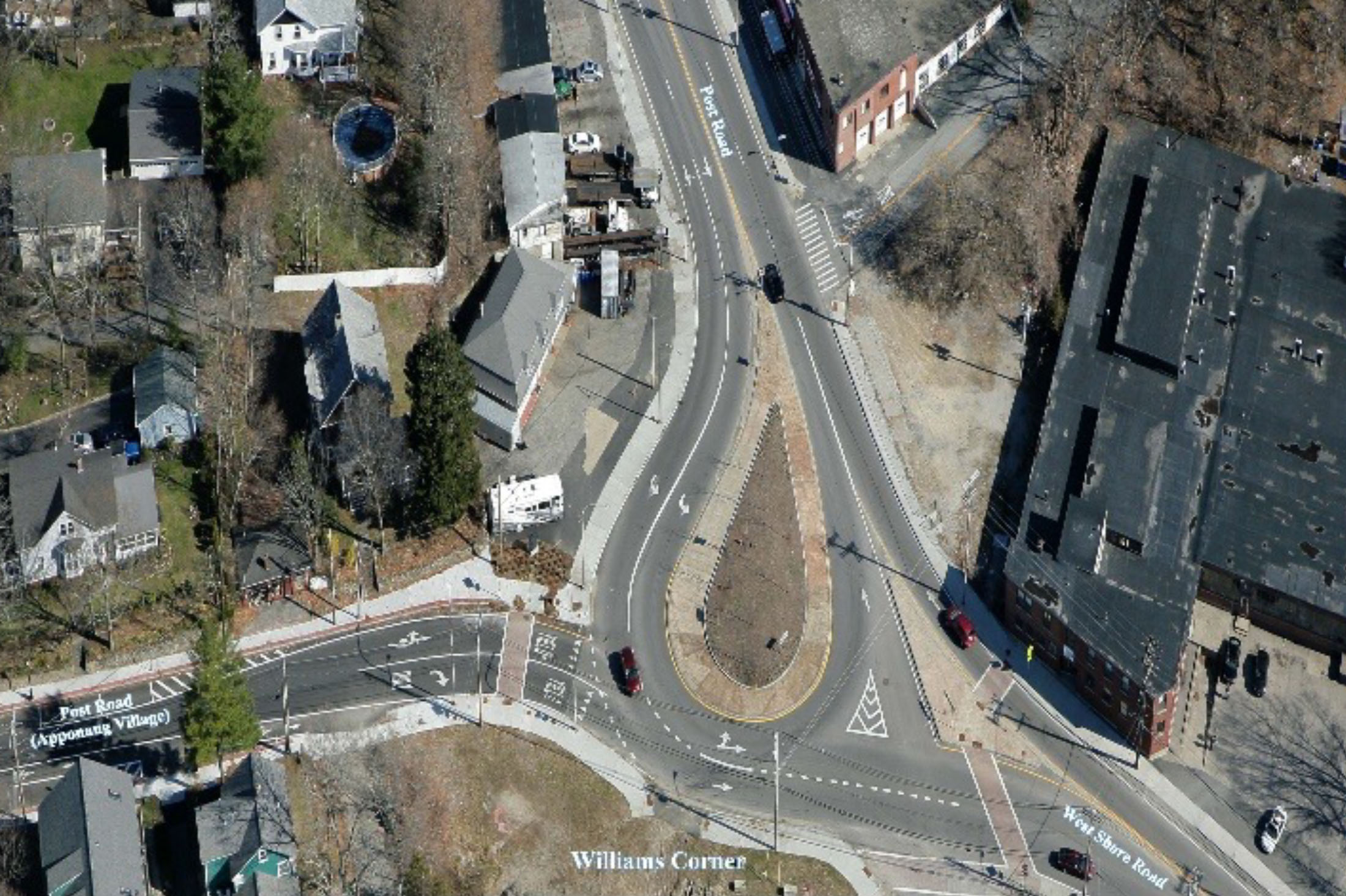 The Apponaug Bypass is a highway project with a heavy traffic design component driving the final concept. The project’s goal was to provide a two-way road around the section of Post Road located in front of the Warwick City Hall, between Apponaug Four Corners and Williams Corner. The new bypass has successfully diverted most of the traffic that formerly travelled on Post Road eastbound at City Hall resulting in significant lower traffic volumes passing through the heart of Apponaug Village. The reduction of those traffic volumes is a key element in the City of Warwick’s plans for the revitalization and redevelopment of the historic village.

Whereas the project was originally planned with traffic signal control at the major intersections, the concept was subsequently revised to incorporate roundabouts due to their increased safety, improved traffic flow, traffic calming effects and aesthetic benefits.

Central to the project design was the need to provide a comprehensive and holistic approach to the management of stormwater and natural resources, particularly due to the project’s location within the watershed of Greenwich Bay—an impaired waterbody subject to a Total Maximum Daily Load (TMDL) plan established by the RIDEM—and, as an MS4 owner/operator regulated under the Rhode Island Pollutant Discharge Elimination System (RIPDES) Phase II Stormwater program, RIDOT is required to amend its Stormwater Management Program Plan (SWMPP) to incorporate measures to address stormwater impacts contributing to the impairment. Complicating the environmental issues was the fact that the 0.2-mile segment of new roadway required to complete the bypass (Veterans Memorial Drive Extension) extends across the former Apponaug Mill Complex, a site known to contain contaminated materials due to its long history of industrial use.

The same Veterans Memorial Drive Extension segment also spans across the Apponaug River (which was culverted under former mill buildings for hydropower and other use) and the floodplain associated with the river and its main tributary (Hardig Brook); and, despite having been culverted along the mill reach, the Apponaug River remains a seasonal fish run for Alewife migrating upstream to spawn in Little Gorton’s Pond, a function of high ecological value that had to be maintained during and following construction. These environmental issues were addressed to the satisfaction of RIDEM, and all required permits were obtained.

A major component of this project, during design and construction, involved stakeholder coordination and public outreach.  GRA coordinated and participated in regularly-scheduled stakeholder meetings which included various city departments (planning, engineering, public works, landscape, etc.), local public agencies (Chamber of commerce, Apponaug Village Association) and local business and property owners. The intent of the meetings was to provide project status information, seek input and address concerns. Stakeholder services also included the coordination and participation in quarterly “Partnering” meetings and related follow-up. The partnership sessions were structured to draw on the strengths of each interested or affected organization to identify and achieve reciprocal goals. Meetings were held every three months during the construction  and contract period.

Construction phase services entailed assisting the RIDOT Resident Engineer through the participation in meetings, investigations, research and review of questions related to concerns, issues, differing site conditions, sequence of construction, or contractor suggested/requested design changes that took place during construction in order to assist with resolutions in a timely and cost-effective manner. Utility coordination was also conducted as necessary to address and help resolve questions or issues.

Bicycle and pedestrian considerations were important throughout the design of this project. The planning for the bypass included sidewalks throughout and shoulders four feet in width to provide for bicycle travel. A bicycle lane has been provided on Post Road in Apponaug Village.

With the bypass in place, the formerly heavy eastbound traffic of approximately 22,000 vehicles per day (VPD) has been reduced to approximately 5,000 VPD. As part of the project, that section of Post Road was reconstructed using a road diet to reduce the former two travel lanes to one lane and a six-foot bicycle lane. Under a complete streets approach, traffic calming is provided through a series of three bump-outs and extensive streetscape treatments. Pedestrian accommodations include new sidewalks throughout and raised crosswalks at the bump-outs.